Building AI for sustainability at Recursive. I used to be a Research Engineering Manager at Google Deepmind, and a Research Scientist at Cogent Labs. I love to cook and go on long hikes. Currently based in Tokyo.

Towards improved generalization in few-shot classification

While state of the art deep learning methods can come close to human performance on several tasks (i.e. classification), we know they are not very data efficient. A human can often generalize from a single instance of a class, while deep learning models need to see thousands of examples to learn the same task. The field of few-shot classification, also known as meta learning (for supervised classification) is concerned with addressing this challenge. In this blog post I aim to give an overview of how the field has developed and where it is moving towards.

The goal is to develop a model that given some context with only a few inputs and outputs (in the case of image classification, images and their target labels) can correctly generalize to unseen data. 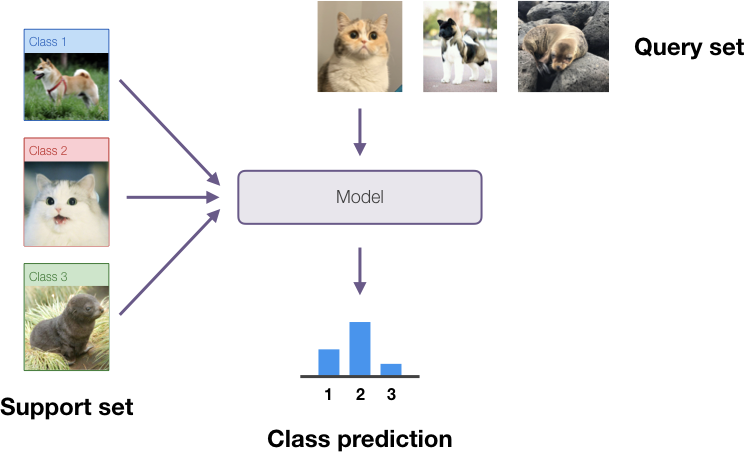 In this setting we assume we have 1 to 10 training data points per class. This amount of data is too small to realistically perform gradient descent on when a model has a very large number of parameters, and this led to the creation of a different class of methods dedicated to solving this problem. In this setting we consider the dataset to be split into two parts: the support set for which we have both inputs and outputs (target classes); and the query set for which we have only the inputs. When not using pretrained models, the training dataset is split into a number of support/query sets for training (sometimes called meta-training) and others for testing. In this case some of the classes are held out from the meta-training dataset so that there is some novelty.

The most popular approaches to tackle this problem can be split into two broad categories, which I’ll outline below.

The first approach is to map the input data to a high dimensional representation space via a neural network backbone trained on other train/test data splits (in the case of image classification, often a convolutional network). On this representation space, an adaptation method can be used to split the data into different volumes corresponding to the different classes based on the support set labels. 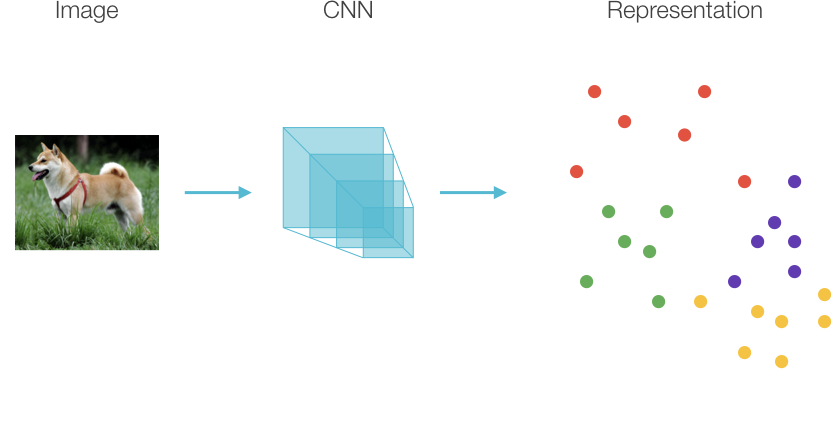 Earliest work in this branch is [Snell17] which creates clusters by averaging all representations in a given class in the support set and then uses a distance metric to calculate posterior class probabilities; and [Vinyals16] which creates a KDE estimate of the posterior class probability distribution based on the distance of the test point to its k-nearest neighbors. Performance for these methods is largely reliant on the representations created by the neural network backbone and results keep improving as bigger and deeper models are deployed. 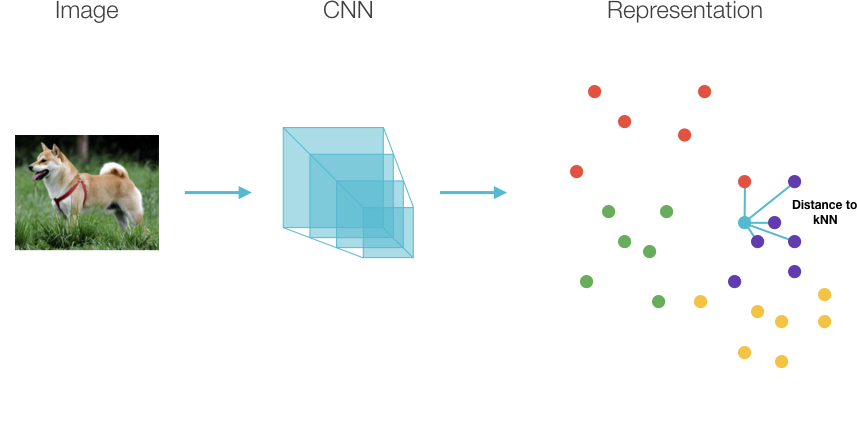 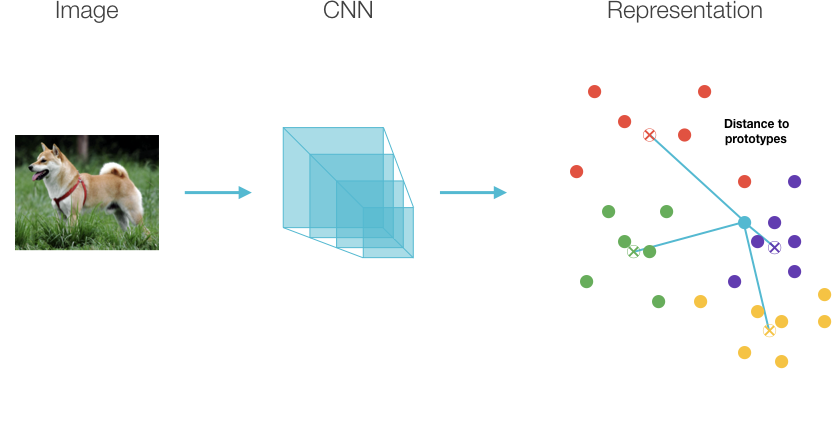 Another approach is to find a more efficient way to adapt the parameters of a classifier than through standard gradient descent alone. Early work [Ravi17] trained an LSTM to calculate the weight updates of a standard convolutional network, instead of using traditional gradient descent. The hope here is that the LSTM learns a good prior for what the weight updates should look like, given the query set. 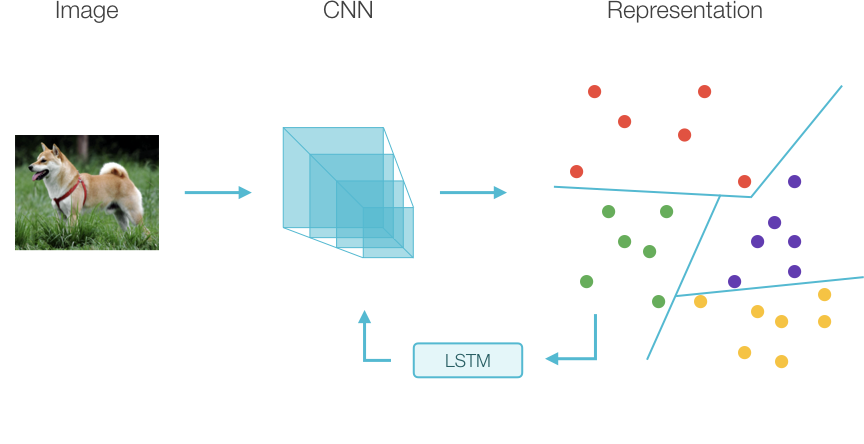 An idea with a very similar spirit was proposed in [Finn17] with MAML, one of the most popular few-shot classification algorithms currently. The authors propose training a network using two nested optimization loops: for each support/query set we have available for training, we initialize the network to the current set of parameters and perform a few steps of standard gradient descent over the cross entropy classification loss. Then we can backpropagate through that whole optimization to take one step of gradient descent over the initialization parameters to find a ‘good’ initialization with which we can get good performance after few steps of gradient descent on all train/test datasets. 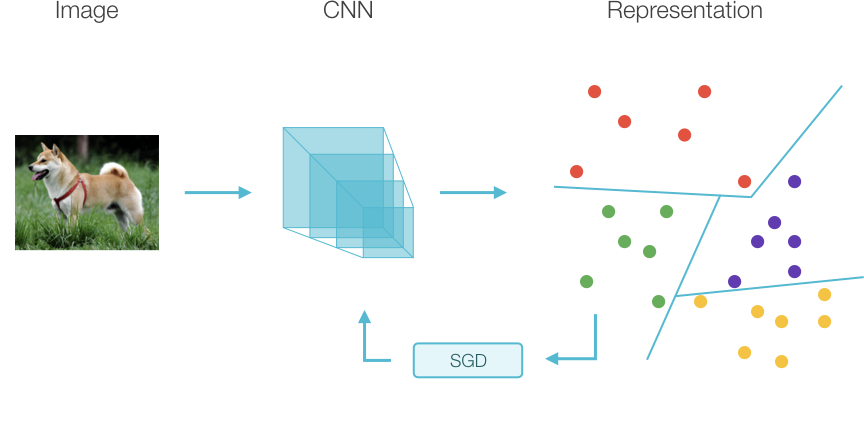 A big issue with MAML is that it is computationally expensive as it requires the calculation of second derivatives, and numerous approximations have been proposed to alleviate this. Recent work [Raghu19] has shown that even for full MAML the ‘inner’ optimization loop (the few steps of vanilla gradient descent on the support set) are doing little more than changing the weights of the final classification head. The authors thus propose replacing the MAML update with fine-tuning of the final classification layer, which brings us back to the fixed representation extractor paradigm. 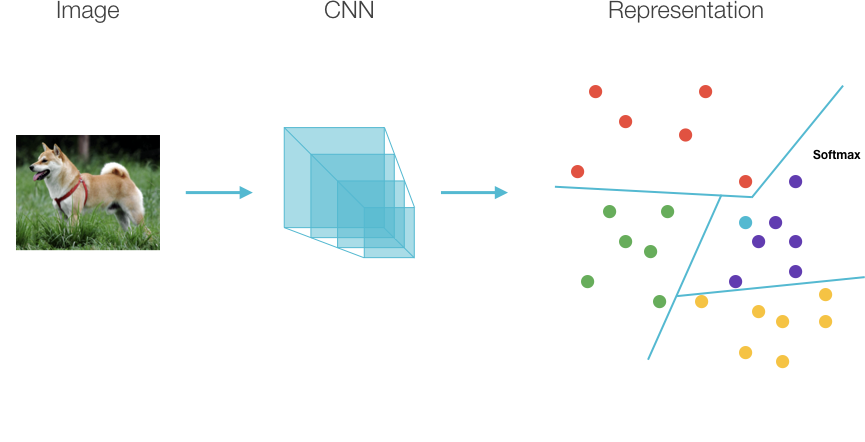 While it is never explicitly mentioned in most literature, there is a large overlap in concerns between transfer learning and few-shot learning, as recent papers have shown that to achieve good results with deep learning models in few-shot classification we have to effectively leverage some kind of prior knowledge. In the image below I summarize my current understanding of the techniques broadly applicable to a problem as a function of degree of domain transfer possible and in-domain data size. 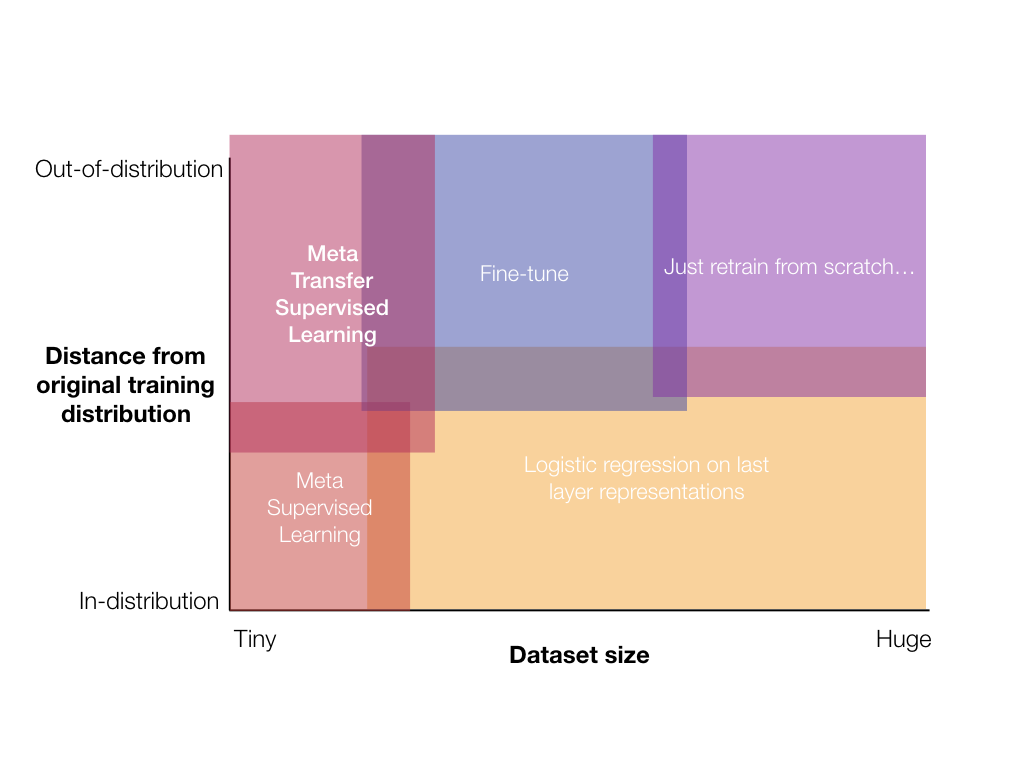 Starting from the easiest problems, if you have a large dataset for your support set you often want to just train your model from scratch. If your dataset is significantly in-domain, you can probably get away with just retraining the classification head (i.e. logistic regression - the orange area in the schematic). Let’s quickly review transfer learning before continuing.

When you have a bit less data, you can either fine-tune your whole model or just retrain the classification layer. A number of papers have investigated the tradeoffs for this scenario [Zhai19] [Kornblith18] concluding that it’s all about the representations:

There are significant caveats to using transfer learning with networks trained on ImageNet though. We know that their generalization power is quite brittle and very dependent on the dataset’s specific data distribution [Recht19], which could imply the representations are not as robust as we would like them to be.

Early work in few shot classification disregarded the transfer aspect at all. Training was performed on the meta training dataset with some classes held out, and performance was tested on remaining in-distribution held out classes. While this tests one aspect of generalization, it doesn’t tell us much about few-shot cross-domain transfer generalization. [Triantafillou19] looked at cross-domain transfer in the few-shot setting and found generally weak performance for all methods when tested on out-of-domain datasets. Training across a wider variety of datasets seems to improve performance, which hints at the fact that, again, it’s all about the representations. 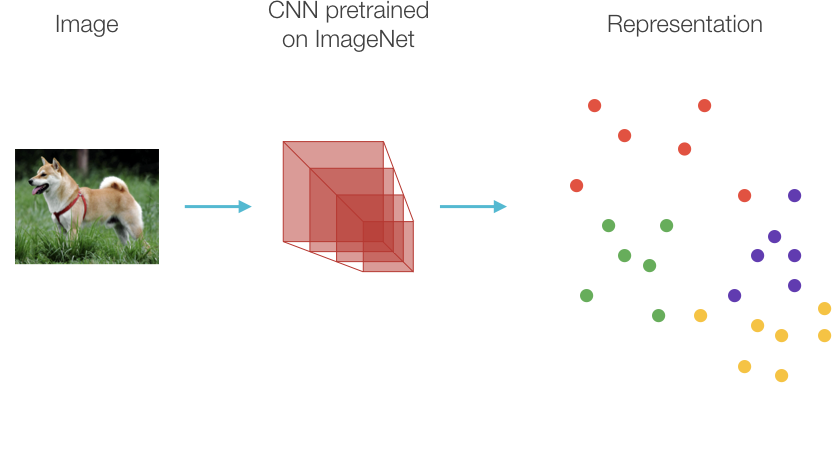 In our recent work [Ramalho19] we investigate the performance of directly using CNNs pretrained on Imagenet as the feature backbone and plugging those representations into various adaptation methods. Since previous lines of research have shown that: bigger models are better, and representation quality is mostly what matters; then we want to look at what happens when we take the biggest models trained on the largest image dataset and test their transfer performance on few-shot classification tasks. The key takeaways of our investigation is as follows: 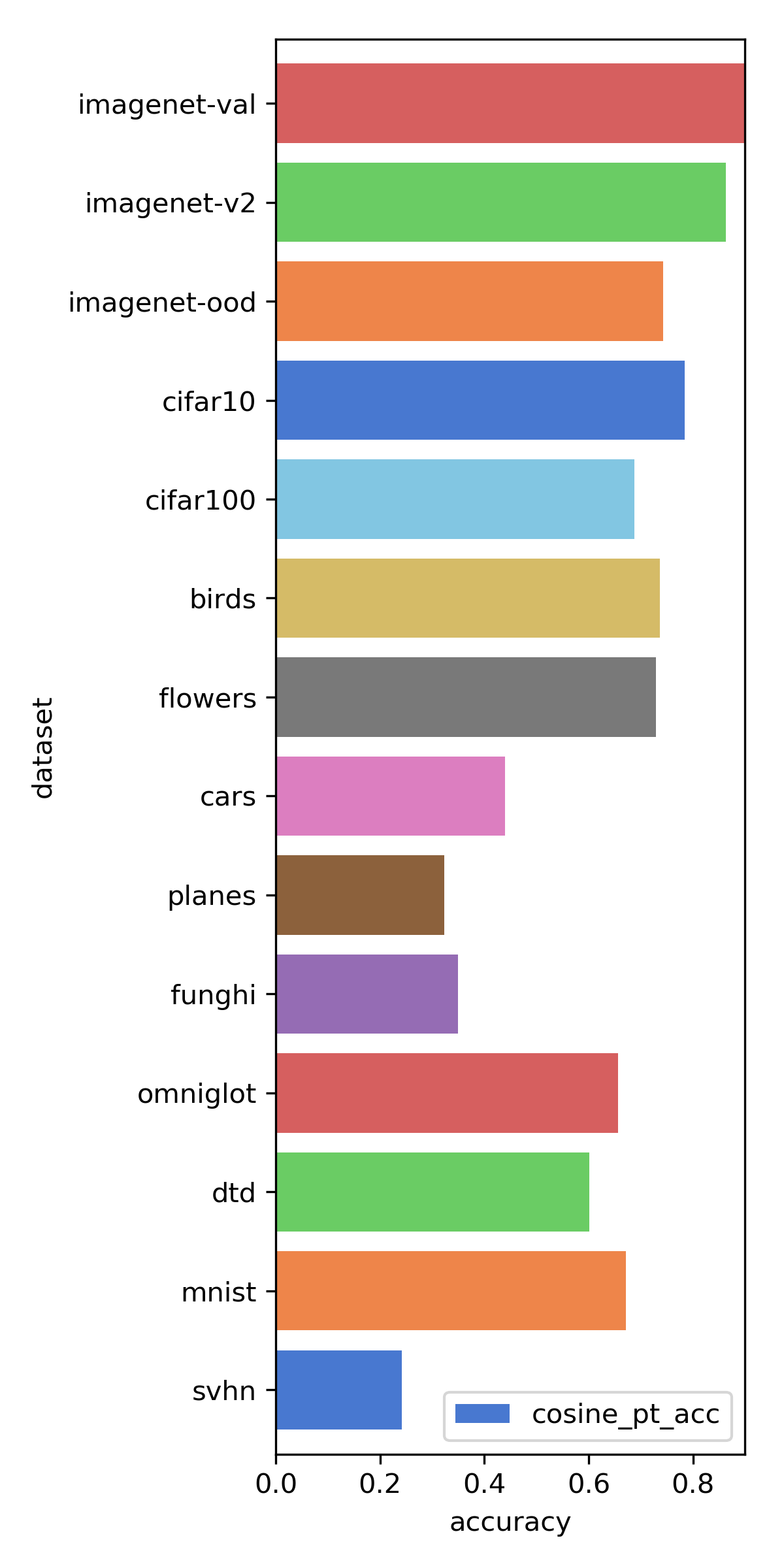 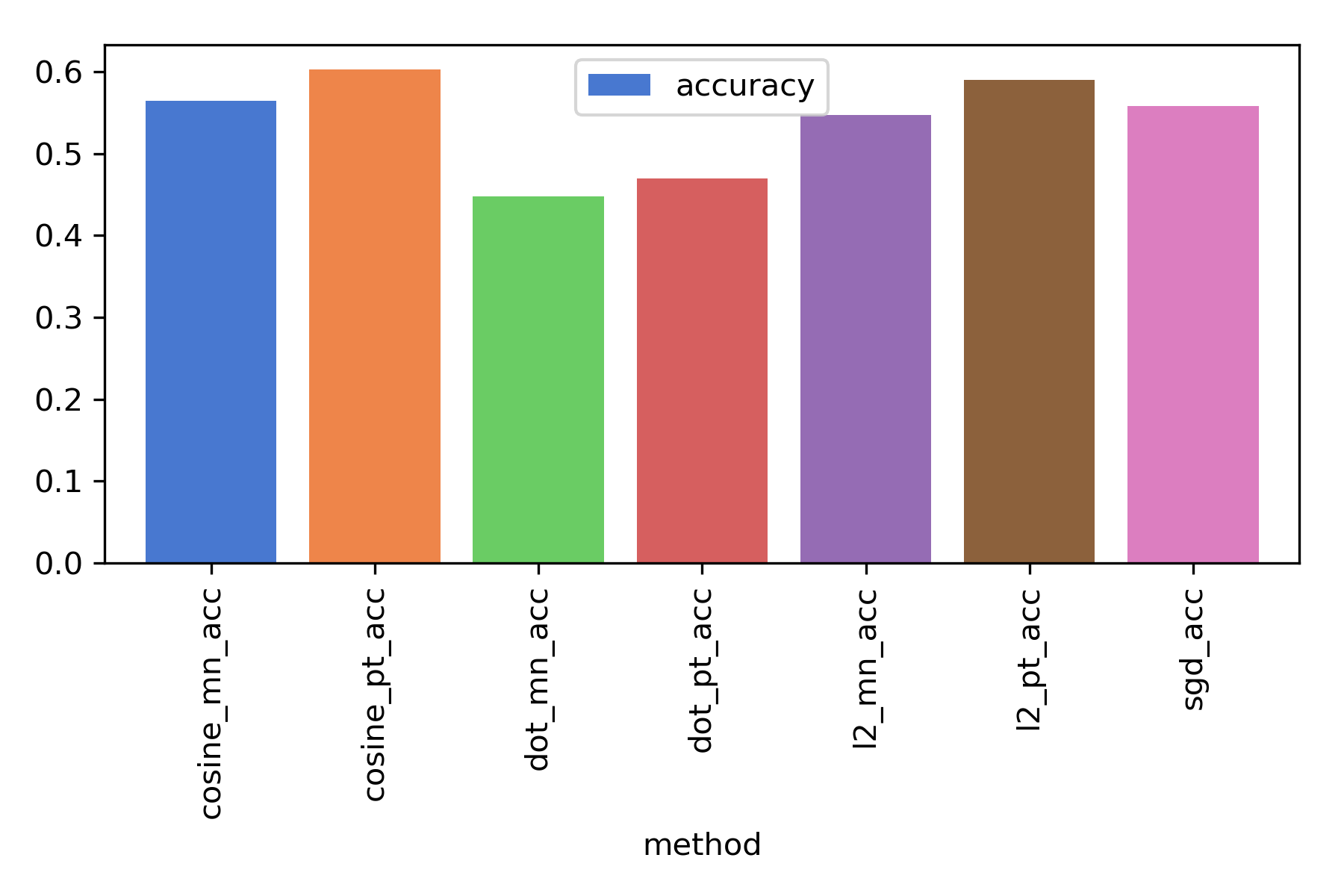 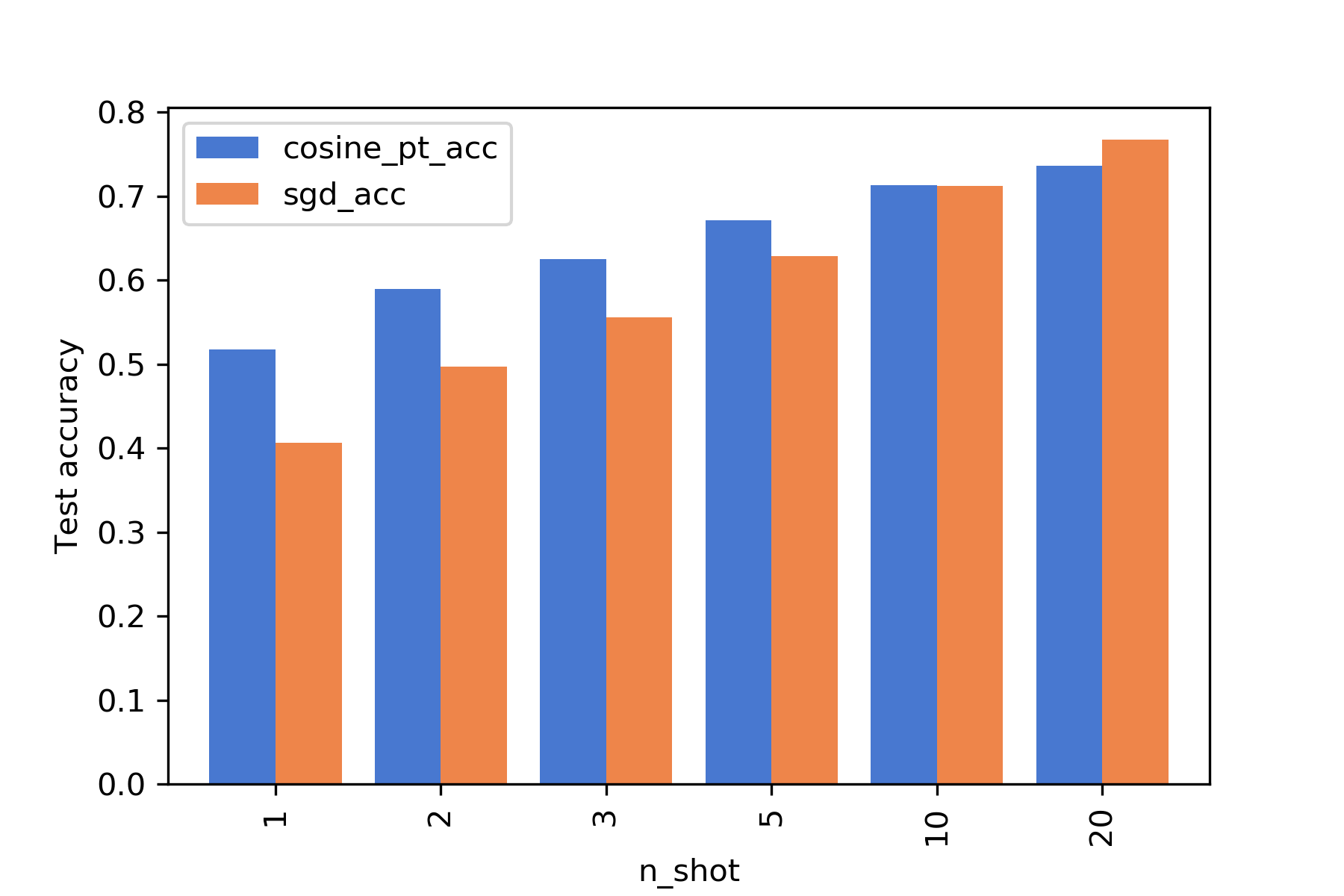